Review: How to Fall for the Wrong Man by Harmony Williams 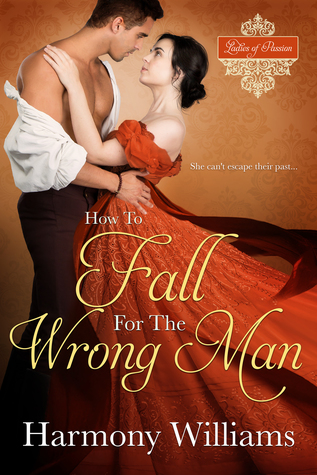 A NEW INSTALLMENT IN THE LADIES OF PASSION SERIES!
WHAT IT’S ABOUT:
If Mary Babington-Smith knows nothing else, it’s that Lord Edwin Sutton kissed her. Regardless of who-kissed-whom, with the deed witnessed, they have no choice but to carry on with a temporary, fake, engagement. When Edwin sweetens the deal, offering Mary the money she needs to pursue her independence if she can play the lovesick fiancée for two weeks, Mary rises to the challenge. In two weeks, she’ll have everything she wants, and this time she’ll be the one to walk out of his life.Despite Sutton’s argumentative, self-assured nature, when Mary glimpses a sliver of the boy he used to be, she vows to peel away every layer of armor he uses to shield his emotions. Somewhere underneath that worldly exterior is the kind-hearted man she once loved, but in order to find him, she’ll have to give him the power to hurt her…and he’s already broken her trust once…

ADD TO GOODREADS
GRAB YOUR COPY

MY THOUGHTS:
I haven’t ready a historical romance in a while, but I was nuts about this couple. Mary and Edwin are a blast together. He twists Mary’s arm into pretending to be his fiancé, and if she can’t fake it she must marry him. She agrees because he says he’ll give her money to put toward an animal shelter. Oh, she’s a feisty one that will make you laugh out loud as she leads Edwin in a merry dance before stealing his heart.
This is the third installment of Harmony Williams’ Ladies of Passion series. No need to have read any of the previous, although characters from those novels do make guest star appearances. This story is utterly enjoyable all on its own. This won’t be the last Harmony Williams story I’ll grab!