For Your Bite Only

The best word for Jasmine Renard’s past year is a four-letter word. After years of concerts and increasing recognition, a rogue group of vampire hunters forced her into hiding. When the offer of a lifetime to perform again comes from the arrogant vampire she’s dreamed of shoving off a cliff, Jasmine might have to reconsider everything. Including, Luca Martens.

Luca has waited long enough to be onstage with Jasmine again. Their electrifying musical chemistry damn near blew his mind the last time they performed. To the point he mishandled what happened backstage after their last concert. He’d do anything to feel the spark again while playing, the one only she can ignite. But she hates him. 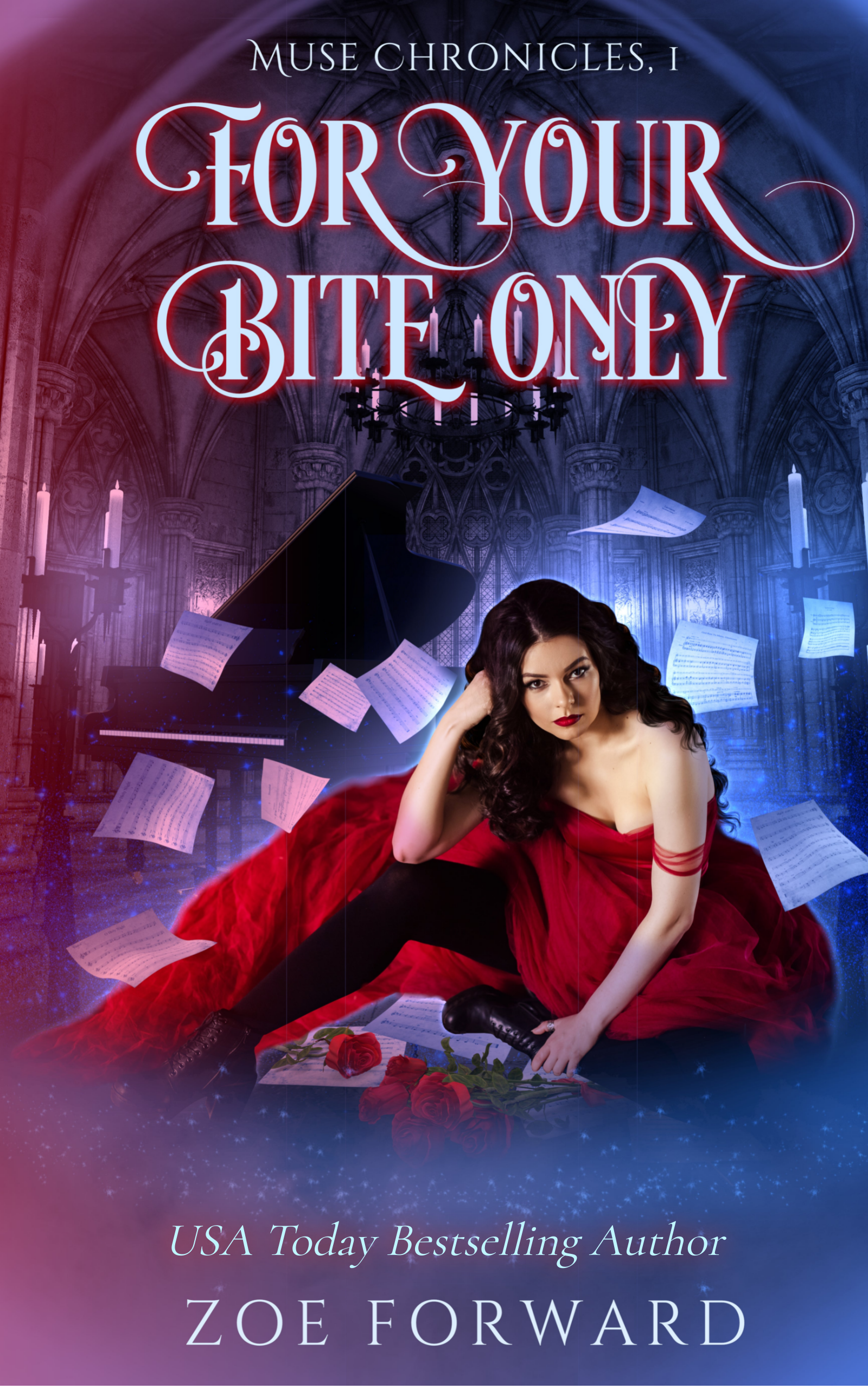 Somehow, Jasmine managed a bow before Luca snagged her hand and stalked offstage with her in tow.

He kept her hand in a crushing grip as he pulled her, sightless and panting, back to his room. He barked something in a language she didn’t recognize, but assumed to be Flemish since Luca spent most of his time in Belgium. The people inside his space disappeared. He locked the door, put down his violin, and caged her against the wall. Not touching, but a hand on each side of her and his body towering around her, confining.

Both panting, they stared at each for endless seconds.

She’d never wanted another being like she wanted him right now. Was it his magic on the violin? Maybe it was his limitless passion for the music.

Get it together. He’d made it clear he didn’t want her, although the intensity in his eyes said different. Whatever this might be was bad for her in the long run if she gave in. Complicated.

Her gaze drifted to his pounding jugular.

“Shouldn’t have done this.” The words came out a harsh rumble from him, accusatory. “You weren’t ready.”

“What? You don’t think I was good enough?”

“You were incredible.” It came out a whisper, more as if trying to convince himself than a declaration. He touched the back of her neck and lowered his mouth as if about to place his mouth against hers, but stopped. Her body strained to get closer to him. Her heart pounded against her ribs. Was he proving his power over her?

“Jasmine, I need you to keep yourself under control for another hour. We have two more pieces before we can lose it.”

“I’m not going to lose it with you. That’s not happening. Ever. Get away from me.” But she didn’t move.

“Do you do this with every musician you solo with?” she asked. “Pull them back to your room for a quickie at intermission?”

He shook his head. “What we feel is from the music. We got swept away. You also have the ability to harness the music to enthrall those around you. Are you even aware you do it?” He touched a thumb to her cheek before pulling it away. “It’s a bloody gift to bewitch all who listen. But, tonight, you have to get some control, not fling it around to the point every male in vicinity has a hard-on for you.”

“Do you have a hard-on for the outcast you despise?” She didn’t move to glance down.

“I don’t despise you.” It came out on a rush of air, so soft she almost missed it.