Bet You Still Think of Me

Bad habits like Colton Reed are hard to break…

Colton owns the stage. He’s an international phenomenon who’s worked hard to have everything. Except the one thing he needs…and lost. His muse.

Kate Thomas refuses to be sucked in by another one of Colton’s soulful gazes. His signature will make their divorce final. Then she can escape the insanity of his super stardom. But the more time they spend together, the harder time she has remembering why he needs to be her ex.

“Zoe Forward’s twist on fame and second chances, and I must say this: she did a SPECTACULAR job with Kate and Colt…I LOVED the fact that this wasn’t your typical rock star romance.” -Jenn the Readaholic

“This was so sweet, so angsty, and so very funny.” – Kristen on Goodreads

“Colt and Kate’s story had the perfect balance of angst to immediately hook me and stay invested…the more I think about it their story’s the perfect length.”  – Angie on Goodreads

“Bet You Still Think Of Me by Zoe Forward is an amazing read and a definite reread.” – Amazon Reviewer 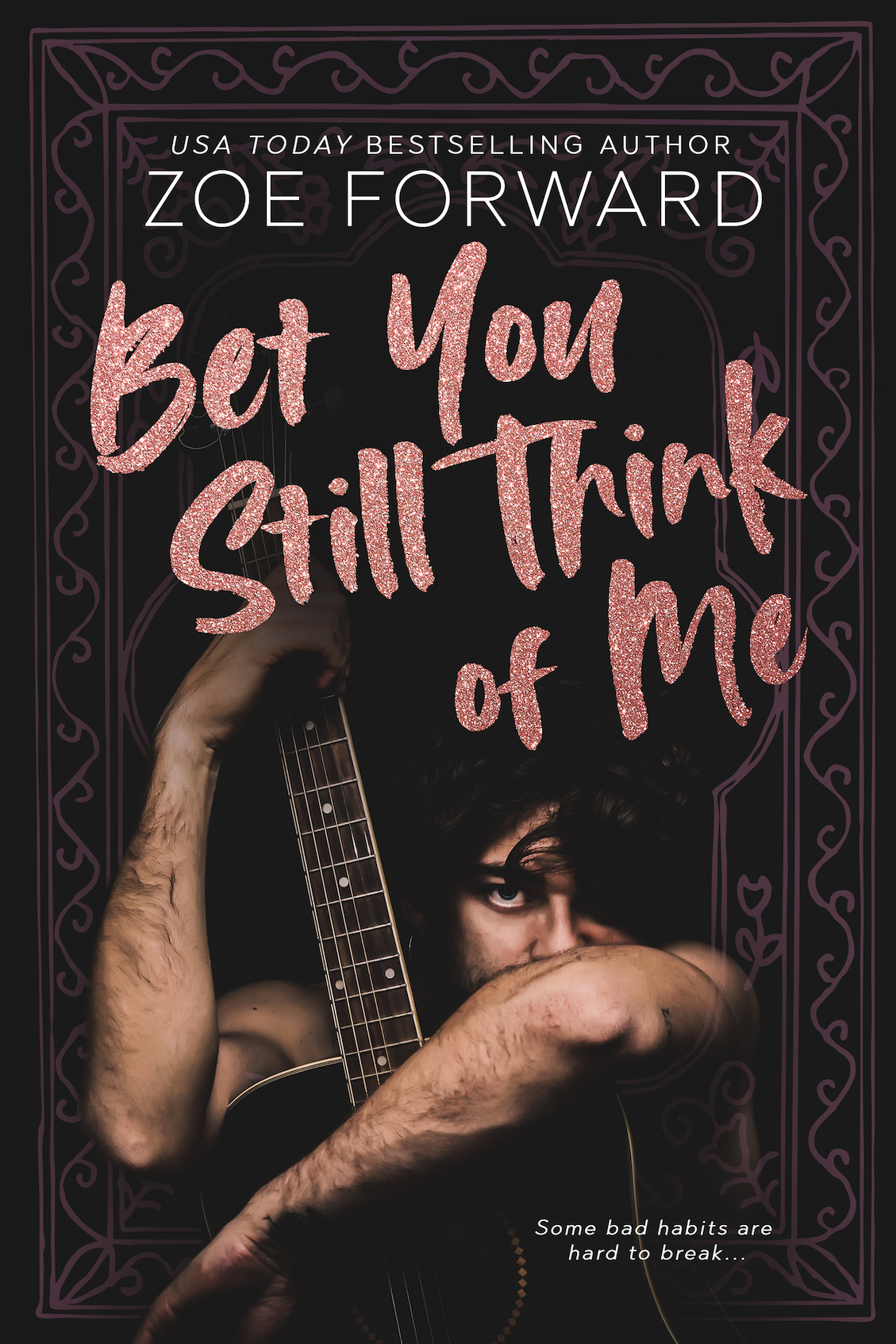 Front row, center seat to see the hottest band of the decade, Summertown, take the stage at the Santa Barbara Bowl. Colton Reed about to sing a few feet away.

Kate Thomas slid low in her seat as if being below stage level made her invisible to those who’d be performing.

Anyone other than her would whoop it up with these amazing tickets to see the country star that graced the cover of magazines and reaped awards this year.

How her CEO boss scored last-minute tickets remained a mystery. Granted, they were perfect to impress the couple from Seattle he wanted to join the marketing department of his animation studio. She wondered why he hadn’t assigned her the task of escorting the prospective employees by herself. Usually, he left this kind of activity to her while he worked on projects he considered a better use of his time. Maybe, like half of the world, he too loved Colton Reed and wouldn’t dare pass up tickets. Or something was up. Something that, as his executive assistant, she should know.

Don’t panic. Colton Reed can’t see you through the bright lights. Even if he could, he wouldn’t recognize her. She’d highlighted her brown hair so light these days it was almost blonde. Last year, she ditched the nose ring and brow piercing and had the Celtic neck tattoo removed. Had to erase college mistakes in order to adult.

“Awesome, huh?” Her boss, Mitchell, threw her a thumbs-up. She returned the signal with fake enthusiasm. Her stomach twisted. A bathroom break that lasted Colton Reed’s entire performance sounded like her best option.

The lights dimmed as the guitar riffs of a familiar beloved ballad started. Everyone except her screamed for Colton. The riffs stopped.

She couldn’t breathe as the lights spotlighted him.

He pushed locks of his irregularly cut blonde hair out of his face and sat on a stool mid-stage. The crowd went wild with earsplitting screams and whistles. Several teenagers nearby fake-fainted.

As applause and screams died down, Colton leaned into the mic. He flashed the crowd his million-dollar, panty-melter smile. “I’m doing it different tonight. Going to hit y’all with a new one first off. Tell me what you think.”

His greenish-blue eyes zeroed in on her locale as if he knew she stood there. He shouldn’t be able to see her. Not through the lights.

Wait a minute… She knew this song.

Then the drums hit a steady, quiet beat right into his first line. She barely registered the words as the magic of his voice washed over her. Beautiful tone, low and sexy… The melody of the new song with his voice equaled pure genius.

She’d worked with him to compose this one long ago, but they’d never gotten the words quite right. All his hit songs were ones they’d written together. It’d been a part of what made them work.

The song’s words slowly penetrated. I’d give anything to bring her back. It’s breaking my heart.

His voice begged her to look. To meet his gaze.

She peeked his way. Bad idea. Immediate refocus onto the edge of the stage.

Her vision became blurry. This was exactly why she shouldn’t see him in person despite all their time apart. Everything was still too raw.

She refused to break down into a puddle crying over the loss of what they’d had, what their future could’ve been if his career hadn’t exploded. She willed herself back together.

A quick glance his way found he’d turned to angle in her direction. The yearning in his voice and the power of the words dredged up heartache she’d buried long ago. Lordy, she used to love this man in an all-consuming, I’ll-die-without-you way. She’d given him everything. He’d used her composing skills, sucked out her soul as fodder for song writing, and then gave up on what they’d built.

This song couldn’t be about her. It was a generic song about any man pining for an ex. But Colton didn’t write generic lyrics. He wrote from the heart. Maybe he used the melody they’d created but reworked the lyrics to make it about the high-profile model he’d been seen with last summer.

I’d do anything to have her back.

Colton’s voice soared above the band, relaying a moment of two people getting drenched in the rain and pulling off each other’s clothes.

They’d done that. Three days after their second date he’d taken her up to an inn in the mountains for a dinner that turned into an overnight. Their need to be naked transcended everything. How dare he make this song about that sacred moment?

The inn… She missed the place. They’d spent everything she inherited from her dad on a down payment when the inn went into foreclosure. Then, they’d made it their home.

The song bordered on obscene. Or was the rapid replay of that afternoon in her brain making it seem so?

Don’t know why I can’t let you go, baby.

He added baby into verses when she’d been alone with him.

Maybe he started adding “baby” when he sang live. Or, maybe he had a new girlfriend, a usurper of the baby nickname, which made more sense. That could not be jealousy making her instantly hate the new girl who’d earned the label. Definitely not her heart pitter-pattering for him all over again. She was over him.

Well, almost divorced. Small glitch to be rectified to finalize it.

His fault. His oversight—his signature on one page—left them hitched. His “Oops, I forgot” led to months of repeat paperwork—one set of documents he never got, the second set was accidentally destroyed by coffee, and the third? Who knew. Her lawyer couldn’t get an answer from him or his people on why he hadn’t signed the newest set of divorce papers they’d sent him three months ago. Yesterday, she’d asked her lawyer to follow up, which cost her eighty bucks an hour, only to end in his recommendation she call Colton herself to get an answer. Um…nope. So, her lawyer promised he would try once more. If that didn’t work, they’d have to take him to court.

As the first song came to a close, someone blocked her view of the stage. From the other side of the railing, which separated the audience from the stage, a man leaned over and shook Mitchell’s hand. “He’ll talk after the show. He’s doing between fifteen and twenty songs tonight.”